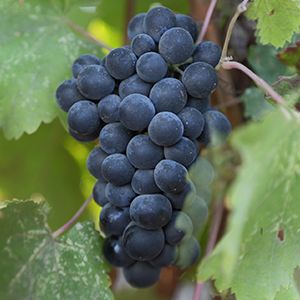 The Merlot is a red grape native of the Gironde, in the South-West of France, particularly the Bordeaux area from which, together with the Cabernet Sauvignon, produces some of the most prestigious wines in the world but it is now widely planted across the world and in terms of volume, it is only rivalled by the Cabernet Sauvignon. Merlot is an early maturing grape variety and can ripen fully even in slightly cooler climates.

Very often, the Merlot is blended with the Cabernet Sauvignon, the two grapes complement each other perfectly, the first giving the wine its fruit, the second, adding tannins, aristocracy and greater longevity. In Bordeaux, depending on the area, it is often added a small percentage of Cabernet Franc that, in addition to its fruit components, adds herbaceous and vegetal flavours. In Italy the Merlot arrived at the end of 1800, initially in Friuli Venezia Giulia, and then quickly spread to the Veneto and Trentino Alto Adige and the north in general, but it is now found in many other regions, from north to South including islands, some time producing outstanding results, even without the addition of other grapes, simply with wood ageing. In Tuscany, the Merlot grape is widely planted and often blended with the native Sangiovese to produce Supertuscan wines.

Merlot wines are often described as smooth, soft, and easy drinking with black fruit on the nose but if wood aged, can produce outstanding wines. The grape is also often used to soften wines made from more tannic varieties such as Cabernet Sauvignon and Sangiovese.

Now that you know more about the Merlot, taste the wines we stock