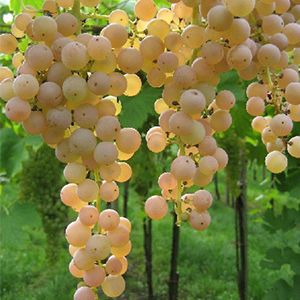 The Marzemina bianca grape is a variety of ancient cultivation, although not much is known of its origins: some say it came from Burgundy, and then spread to Germany, Austria, Switzerland and Italy. Others indicate it as synonymous with the “Chasselas dorato”. This grape was widely cultivated in Treviso, on the Euganean Hills and other wine towns in northern Italy, especially in the Lison-Pramaggiore area. It is also called Sciampagna because it gives rise to an aromatic sparkling wine. In the area of Breganze this wine is passed on Torcolato pomace, which gives it more body and aroma. The white Marzemina bianca grape is used in blends with other varieties made of white fruit, like Prosecco (Glera), Verduzzo, Chardonnay, Verdiso and Vespaiola. The berry is white colored, large and spherical with waxy and golden yellow, thick skin. The bunch is medium, elongated pyramidal and winged, of medium firmness with medium, orbicular, trefoil leaf. Marzemina bianca gives a pale yellow wine with an intense aroma, fruity and tangy, slightly bitter flavor.