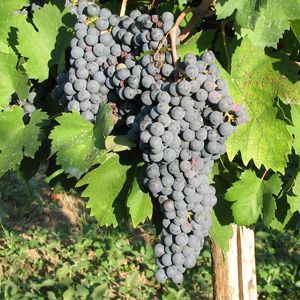 Barbera is an easy to grow red grape, and whilst in Piedmont is very often vinified on its own and produces the widely known Barbera D’Alba and Barbera D’Asti, outside the region, it is often used in blends due to its high level of acidity, supporting grapes that are lacking it.

Initially the Barbera was considered an average grape and wine, it was the everyday wine in Piedmont, considered inferior to Nebbiolo wines, but over time, thanks to forward thinking wine makers and the use of wood ageing to add tannins, complexity and longevity, its reputation has grown and now Barbera produces excellent examples.

The Barbera grape is used in many wines, there are dozens of Italian DOC wines permitting its use, but the most important, and made only with Barbera grape, are the Barbera D’Alba, from grapes grown in vineyards located in and around the town of Alba, and Barbera D’Asti, from Asti, both towns located in Piedmont and very close to each other.

Now that you know more about the Barbera, taste the wines we stock