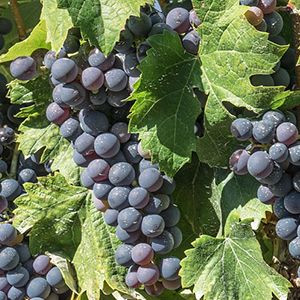 The Sciascinoso grape is of uncertain origin, as well as uncertain is the question of its correspondence with the black grape Olivella. This confusing situation is due to the fact that the Olivella name was in turn attributed to numerous varieties, because of the resemblance of their berry, for the color and the elongated shape that could remember, precisely, an olive. The Sciascinoso grape is located in Campania and has been present in the National Registry of vine varieties since 1970. The Olivella nera was recorded in the Register one year later. In the documents regarding all of the vine names coming from the Campania, only Sciascinoso is mentioned - possibly with explanation “locally known as Olivella”, while the Olivella as such is present in the specification of Frusinate IGT (Lazio). Its berry is black, medium-small, ovoid with consisting, red-black colored skin. The bunch is : medium, conical, moderately compact, winged with medium, pentagonal leaf with seven lobes. The Sciascinoso variety has medium vigor and medium-early maturity. The Sciascinoso gives a wine with intense ruby red color with purple hues. It is vinous, fruity with hints of plum, cherry and blueberry. On the palate it is fresh, tannic and consistent.