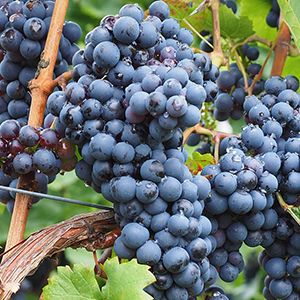 The Chatus grape variety, also known as Bourgnin, that was once probably widespread in Piedmont, it can be found in the entire Alpine region, from Mondovì to Canavese, to Biella and even in Val d'Ossola. Today the Chatus is cultivated mainly in the surroundings of Dronero (hence the synonym “Nebbiolo di Dronero”), on the hills of Saluzzo and in Pinerolo.

The Chatus has a probable French origin and was once grown by the Savoy in the Massif Central, but later was abandoned, to be only recently reintroduced.

The Chatus is one of the most promising varieties of ancient tradition from an oenological point of view, it can be used both in blends with less structured grapes or on its own to produce wines with a ageing potential.

The Chatus grape variety is well suited for thin and acidic soils found in mountain environments. Chatus is a rustic grape variety with late ripening and a good balance between vegetation and production, its productivity is moderate and fairly constant.

Chatus grapes produce deep purple coloured wines, with a spicy and fruity nose, plum and blueberry. The palate is full, with a good acidity, persistent and overall very pleasant.