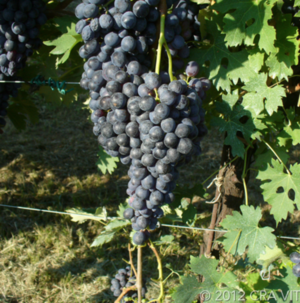 The Vespolina grape variety is present mainly in the Oltrepò Pavese area, located in the most southern province of Pavia, near the first Apennine formations, and it is grown in the hills and valleys with altitudes between 100 and 500 meters above sea level. The name Vespolina, as in the case of varieties with similar names (Vespaiola), derives from the fact that wasps are particularly attracted by the sweetness of its ripe berries at the time of harvest. It is also known by the synonymous Ughetta, that was one of the most important vines of Oltrepò area, cultivated there since the end of the 18th century, but lost importance with the advent of phylloxera. It is also very widespread in the provinces of Como, Novara (Ghemme, Gattinara) and Piacenza. Traditionally Vespolina is vinified in blends with other grapes such as Barbera, Croatina, Uva Rara, where it provides a characteristic spicy note. Its berry is black medium, ellipsoidal with waxy, rather thin and not very consistent skin of blue-black color. The bunch is medium, cylindrical or conical, elongated, moderately compact, often winged with a small or medium-small, wedge-shaped or pentagonal, five-lobed leaf. The vine Vespolina prefers land not drought, fresh and deep, not very fertile and sunny. It has medium vigor and time of average maturity. The production is regular but not very abundant. The Vespolina grape gives an intense ruby-red wine, floral and spicy on the nose, with light and lively taste, to be drunk young.