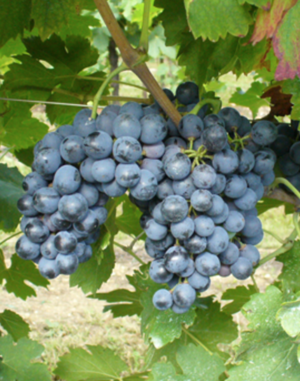 The Vernaccia Nera is a variety grown in the Marche region, particularly in the area of Serrapetrona, in the province of Macerata, where even today they produce very limited quantities, so that it can be considered a rarity, both from the ampelographic standpoint and the winemaking. The total area planted with vines of this variety to date amounts to approximately 45 hectares. The term “Vernaccia” seems to come from the Latin “ver”, Spring, or from “vitis vernacula”, meaning “from home”, as reported by Columella in his work “De re rustica”. According to others the term could be of more recent derivation and traced back to the French variety Grenache or its Catalan synonymous Garnacha. In fact, there are clear similarities between Garnacha and Vernaccia nera cultivated in The Marches. Moreover, from a genetic point of view, it is now certain the common origin both with the Sardinian Cannonau as with the Tocai rosso grown in Vicenza, although the three species continue to be classified separately in the National Register of Grapevine varieties. The Vernaccia nera is used primarily for the production of Vernaccia di Serrapetrona DOCG, red sparkling wine made with the particularity to be subjected to withering about half (40%) of the grapes for sparkling wine and proceed after assemblying with the wine made from dried grapes. Its berry is black, medium, spheroidal with skin of medium texture, thick, black purple colored. The bunch is medium, cylindrical-conical, often winged, tight with a medium, orbicular leaf, five-lobed, sometimes three-lobed. The Vernaccia Nera has a good vigor and time of late maturation, its production is abundant. The Vernaccia Nera gives a not very intense ruby-red wine. The scent is predominately vinous and the taste is harmonious, fresh, medium-bodied, with a slightly bitter finish.