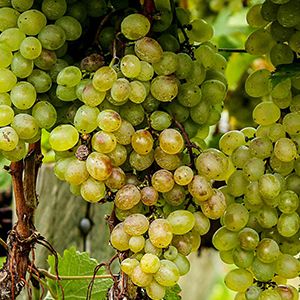 The Vernaccia di Oristano vine has been present in Sardinia, as cited by name in the province of Oristano, since ancient times. The total area planted with vines of this variety to date amounts to approximately 45 hectares. The term “Vernaccia” seems to come from the Latin “ver”, Spring, or from “vitis vernacula”, meaning “from home”, as reported by Columella in his work “De re rustica”. According to others the term could be of more recent derivation and traced back to the French variety Grenache or its Catalan synonymous Garnacha. Vernaccia di Oristano shares its name with the Vernaccia di San Gimignano, but the two varieties are absolutely distinct from an ampelographic point of view. In its typical cultivation area, the Oristanese, it is also used for the production of Vernaccia DOC. The berry is white, medium-small, round or sub-round with thin, fragile, very waxy, yellow skin with shades of gold or greenish. The bunch is small, cylindrical or cylindrical-conical, semi-tight or tightened with a small, orbicular, trefoil leaf. The Vernaccia di Oristano has medium-high vigor and medium-late time of maturity. Its productivity is abundant and regular. The Vernaccia di Oristano grape gives an amber-yellow wine, more or less intense according to aging; the scent is delicate, ethereal, with notes of almond blossom; the flavor is dry, savory, warm, fine, light-bodied, with hints of bitter almonds.