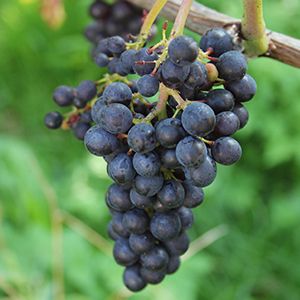 The Nocera grape is very similar to Nerelli. It has traditionally been grown in the area of Messina in Sicily since ancient times. Some make the assumption that it is related to historical wine “Mamertinum” and “Zancle” celebrated by the ancient Romans. It was once very widespread, so it is nowadays possible to find very old strains in the vineyards in the province of Messina although today it is reduced to a few hectares, supplanted not only by vines of Nerello Mascalese and Cappuccio, but also by national and international varieties. Scattered plants are also present in the vineyards in the province of Catania, Siracusa and Ragusa. Together with Nerello Mascalese and Cappuccio, Nocera makes part in the production of the Faro Doc. This grape has also been “exported” to Calabria with some success and, in the middle of the last century, in France: Provence and Beaujolais, where it spread with the names of “Suquet” and “Barbe du Sultan”. Nocera has a black berry that is medium sized, ellipsoidal, with consistent peel of bluish-black color. Its bunch is medium, cylindrical-conical, usually medium or loose with medium whole leaves. The Nocera grape produces a ruby red color wine with purple hues, with good aromas, full-bodied, rich fixed acidity, alcohol and tannin.