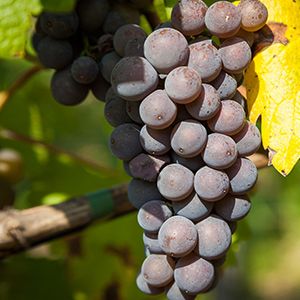 The Neyret vine is not widespread, with a production quantitatively insignificant both in our days as in the past. The very few citations do come from neighboring France and Switzerland, but its arrival in Valle d'Aosta is rather to be attributed to trade with the Canavese or the rest of Piedmont. According to DNA tests, the Neyret variety belongs to the group of Piedmont Neretti (such as Neretto del pinerolese or Chatus). Its name comes from the blue black color of its berries and its consequent ability to give life to a very colorful wine. The berry is black, medium, regular with very waxy, thick and consistent, blue-black skin. The bunch is medium, cylindrical, elongated, with one or two wings and a medium, trefoil leaf. The Neyret variety has medium vigor and rather uneven production, as a subject to phenomena of lambing and leaking. The Neyret grape is generally vinified in assembly with other Aosta Valley grapes, such as Nebbiolo, Fumin or Petit Rouge. Consequently, little is known about the tasting characteristics of the product in its purity. The contribution of the Neyret in the blends is an especially intense color.