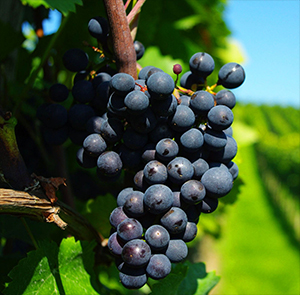 The vine Gamba rossa (Red Leg) is better known with the local synonym “Gamba di Pernice” (partridge’s leg) even if the only synonymous officially recognized is “Empress of the red leg.” The vine owes its unusual name to the fact that before veraison (colorizing of the grapes before ripening) the stalk is bright red and even its shape reminds the legs of partridges, which at that time inhabit the vineyards. This vine is still present as it miraculously survived the disaster caused in the late 19th and early 20th century by phylloxera, when many varieties disappeared. The Gamba rossa lives among the rows of the municipality of Calosso and surrounding municipalities Costigliole d'Asti and Canelli, all in the south of Asti, and was threatened with extinction before being rediscovered and brought back to life shortly more than ten years ago. It is registered in the National Register of grapevine varieties since 2007. The vine Gamba rossa gives a wine with a medium garnet red color. The scent is intense, spicy and balsamic, with hints of green pepper and other oriental essences; fruity with predominant notes of jam and cherries. The taste is dry, bodied, and tannic, often with a strong mineral finish, with the return of spicy sensations perceived in the nose.