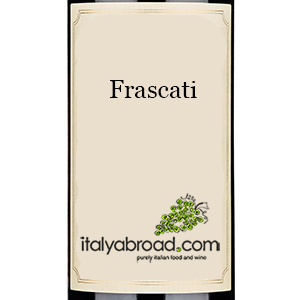 Frascati DOC is a white wine named after the town of Frascati, just on the outskirt of Rome, and during the 80s one of the most famous and exported Italian wine, a fame that slowly came to an end due to the poor quality Frascati that was being produced to satisfy the demand.

Frascati was one of Italy’s first DOC wines and was often described as “The Golden Wine” by the Romans because of its colour and value. The Frascati DOC is a blend of different white grapes, usually, but not always, including Malvasia Puntinata, Trebbiano Toscano and Malvasia del Lazio amongst the others.

Frascati DOC is available in two versions, Secco and Amabile. The Frascati secco is the dry version of Frascati we all know, and the Amabile is the medium sweet version, only known and consumed locally. A Frascati DOC superior, Superiore, is also produced, requiring the wine to be at least 11.5% in alcohol content, however, nowadays, all Frascatis are well above the 11.5% so the alcohol distinction is not used anymore to differentiate one wine from another but it is the winemaker that decides, based on the vintage, whether to produce a normal Frascati or the Superiore.

Frascati, despite several attempts and plenty of new producers making great wines, has not been able to recover from the image issues yet, other wines that had similar fate have succeeded, that has almost disappeared from supermarkets’ shelves and restaurants’ wine lists.