Bologna is considered the Italian food capital and Majani is one of the artisans that helped Bologna to achieve its status.

Majani has been making artisan chocolate since 1796, it is the oldest chocolatier in Italy and it is listed in the Gold Register, a government official document, among the “150 Companies that have made Italy”, they became famous after winning the competition to create a chocolate to launch the then new Fiat's Tipo 4 in 1911 – their creation was a cremino with 4 layers, all others have 3 - and cremino is still their pièce de résistance, their masterpiece.

Artisan Chocolate is all about cocoa and Majani’s chocolatiers source only the best in the world. Majani is one of the very few Italian artisans that still follow the traditional method and the secret in their artisan chocolate is the total control of the production process, from raw cocoa seeds (up to 20 different varieties) up to the finished product.

Majani chocolatiers are not only producing some of the best Italian artisan chocolate but are continually creating new pieces of artisan mastery, like the tortellino, a tribute to the typical dish famous all over the world of their native Bologna, with a chocolate that unite the hard and soft chocolate. 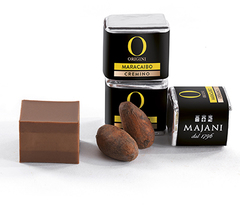