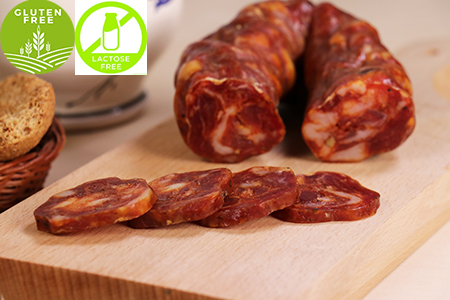 The sausage is another famous Calabrian delicacy, perfect to be enjoyed on its one or on a slice of bread, sweet or spicy, sausage is the most eaten delicatessen by Calabrian families.

This artisan sausage is made with lean meats strictly from Calabrian pigs, with the addition of bacon to adds softness. The pieces of meat are minced in medium grain and kneaded with salt and, for the spicy sausage, the Calabrian red chilli. The mixture is left to rest for a whole night and then bagged in natural casings meticulously washed, pierced and tied. Finally, a maturing period of at least fifty days follows.

The Calabrian sausage has an unmistakable aroma and intense flavor, or in the case of spicy sausage, a strong taste of Calabrian chilli. Sausage is one of those cold cuts that find multiple uses in the kitchen, from appetizer to enrichment to main courses.

Meat, salt and Calabrian chilli are the only ingredients of the Calla’s sausage, it is free of preservatives, gluten and lactose free.

Please note that the weight is approximate. Our Sausage is made by an artisan by hand, not a factory, and can vary a few grams either way.

Be the first to review Artisan Calabrian Sausages, Salumifico Calla’ and you will receive 100 points to use against your next purchase